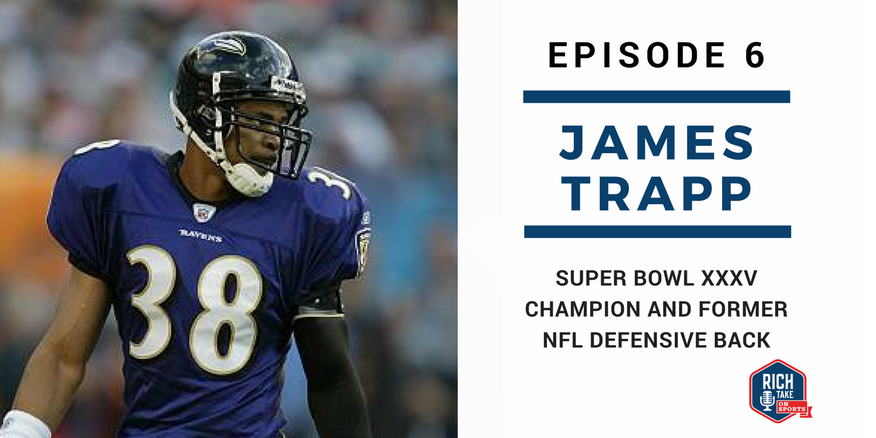 Our guest in this episode is former Oakland Raider and Super Bowl champ with the Baltimore Ravens in Super Bowl James Trapp.

Now in order for you to stay current and not miss any future episodes you can subscribe via iTunes, Google Play, find episodes on Stitcher and all of this can be easily found on our website richtakeonsports.com.

Also, the biggest compliment you can provide is by sharing this podcast with others and also providing feedback on iTunes by rating and reviewing and there’s going to be more details coming soon about some exciting free giveaways that we’re going to be doing for you listeners that provide a review on iTunes.

Or you can email me:

This week in the Rich Spotlight our guest is James Trapp most notably known now as Minister James Trapp on Twitter as his life has unfolded into serving others.

James’s story is one of how talent can take you far greater than you can ever imagine through God given athletic ability but also the destruction that can occur when you become so self-absorbed in yourself.

James was a stand-out cornerback at Clemson University and was selected in the 3rd Round of the NFL draft by the Oakland Raiders. He was also a world class sprinter and a two-sport athlete at Clemson from 1989-1993 where in 1992 he was the 200 meter indoor NCAA Champion and won 2 gold medals in international competitions and was selected as an alternate for the 1992 Olympics in Barcelona.

James was not a track guy playing football. He was a football player that just happened to run track and ultimately reaching the pinnacle in the NFL with the Baltimore Ravens by winning Super Bowl 35 in 2000 and you’ll understand what I mean after hearing his story.

James’ journey started in Greenville, SC. Gives special recognition to Sam Wyche and his store because they gave him his first pair of football cleats. Played all sports in the neighborhood. Football was a part of his life because it was a get away from the life that he was living.

You become cocky once you realize that you’re good at sports. Started playing football at 7 or 8.  Neighborhood vs. Neighborhood.

Loved the physicality of football and become a sport that he really enjoyed. Baseball was too boring and basketball too many fouls.

Moved out of South Carolina in Texas and Mom was in the military. In Fort Hood living in a new environment and ran track but did not play football. Moved to Oklahoma and started playing football and played QB.

Very arrogant and cocky and the only thing that drove him was him.

Played with Will Shields who is an NFL Hall of Famer and most of his coaching staff is still alive. Only players that could play were the ones that wanted to play at the next level. Coaches provide so much than just coaching. Knew he was better than everyone else in junior high school.

Normally all kids from Lawton HS went to Oklahoma, however, Coach Switzer was not confident he would still be head coach and James actually want to go to Clemson and play for Coach Danny Ford. He was called a traitor by all of the people in Oklahoma when he signed with Clemson.

Only ran track at Clemson because he couldn’t start on the football team as a freshman and he was very cocky on the track and he was a loud mouth.

Had a to make a decision if he was going to really put in the effort to train more and better to compete against the best in the world. Changed his decision to fish only and the new training made the biggest difference.

Started to make significant improvements and then made the Olympic team. Herman Moore torched him in a game.

He knew he could play in the NFL and kept pushing forward and was kicked off the team by Ken Hatfield. James had a deal with Adidas on the table but still wanted to play football and was put into the combine and he was put in for his speed. Was ranked 112th initially and finished ranked 14th.

Oakland Raiders drafted in 1993 in was with his best friend Chester McGlockton.

Some of his best days were in Baltimore and remembers a time he spent with Tony Dungy talking about the story behind his Super Bowl ring. James actually likes talking about the trials and tribulations ins his life and uses the platform that the Lord has given him.

In 1999 he made the transition to find his faith after a very difficult year in 1998 with the Raiders and then became a Free Agent in 1999. Ozzie Newsome said he would sign him with the Ravens as long as he did certain things and Coach Schafer from the Raiders now with the Ravens wanted him.  About to lose his wife and family.

One night he looked at blank TV screen and now it’s late at night and the Lord reflected on his life and the people that he had hurt and he started crying and he’s not a crier. He called the chaplain and he came right over and was led to Christ.  First person he called was Napoleon Kaufman who changed his life while with the Raiders.

I hope you enjoyed that interview and who’s with me when I say WOW! The beauty of his story is hard to refute.  Here’s a guy that God just simply touched with unbridled athletic ability and it took James to places that he could have never imagined as a young boy and as he described it was all about him and his mirror.  He didn’t care for anyone else.  It was until a late night starring into another mirror but this time it was a blank tv screen and his life was transformed as he came to know his faith. His wife was very skeptical but this moment saved his life and his family.

Opportunity to play for the Lord even though he still choked people out and had so much fun. You will only know true freedom when you’re doing it for the Lord and you will be free.

Words of Wisdom – “Strong as the Vine” which came from his grandmother. Always signs off with SATV.  Even when you go through tough times stay attached and the Lord will prune away the tough times.

You could just hear it in his voice the joy he had playing after that lonely night in his hotel room and he continues to focus on others now. He’s served as team chaplain back at Clemson and for the Buffalo Bills and now continues his work in the NFL through Player Engagement. Just a wonderful story and that’s why we released this bonus episode.

We’ll be back again with another episode later this week and as I mentioned earlier stay tuned for some exciting news regarding some giveaways for listeners that leave a review on iTunes. Until then remember you can listen, download, and even subscribe on our website richtakeonsports.com and focus forward so we don’t live in the past. All the best everyone!